Friends and family,
Our restaurant is open for carry-out business! You can order by phone (301-589-8222) or via Uber Eats, Door Dash, and GrubHub. We look forward to continuing to serve you.

Mansa Kunda is a welcoming neighborhood restaurant and bar. Come for coffee and breakfast treats in the morning. A snack at midday.

Here are some updates below:

Mansa Kunda Restaurant in Takoma Park, MD is a place where people come together to celebrate the diversity and food of West Africa.

VEGETARIAN OPTIONS:
Almost 90% of our dishes can be made vegetarian. Our owner is a practicing vegetarian and can accommodate most requests for vegetarian dishes. We are working on a new menu which will clearly indicate which items are vegetarian and/or gluten-free.

SPECIAL EVENTS / CATERING:
Host your next corporate event, birthday, graduation party or other gathering with us.

A welcoming neighborhood restaurant and bar. Come for coffee and breakfast treats in the morning. Brunch on weekends. A snack at midday. Dinner starting at 5:00 PM.

Africa is the second largest continent on the planet, with more than 55 countries. It is home to nearly a billion people. It’s a land of diversity and difference – where more than 800 languages and dialects are spoken and every major religion is practiced. It’s the birthplace of mankind and also the continent where cooking and fire were first discovered.

Africa is a land of Ubuntu –

I am what I am because of all who we are.

Ubuntu is the idea that there is a universal bond of sharing that connects all people and calls for humanity towards others.

At Mansa Kunda Restaurant, we hope that you discover a new cuisine and find Ubuntu. 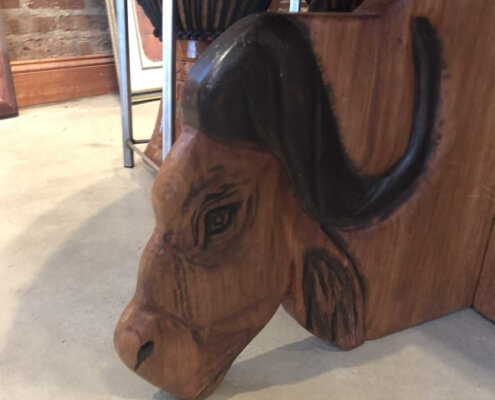 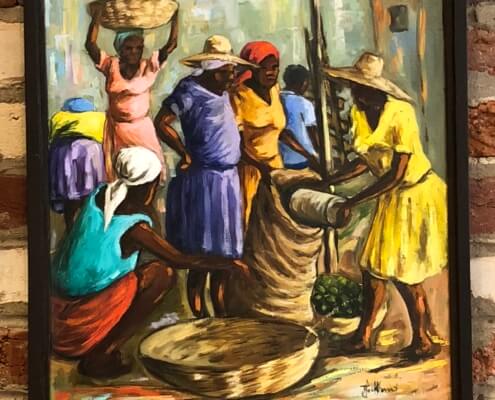 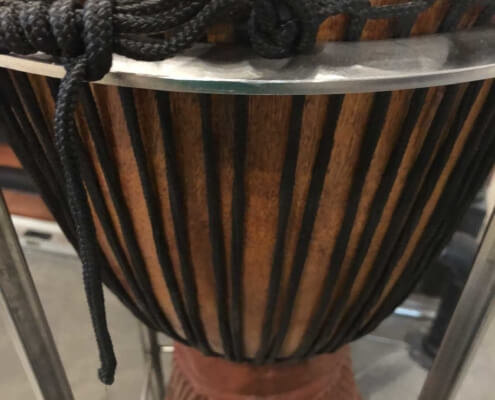 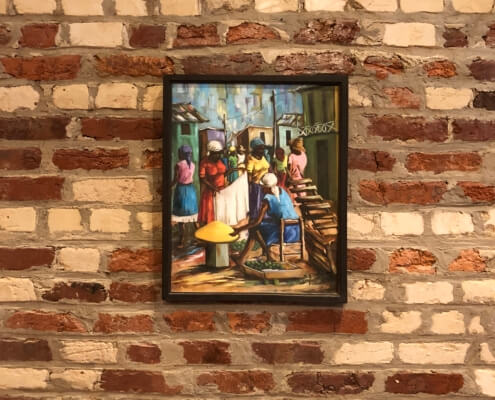 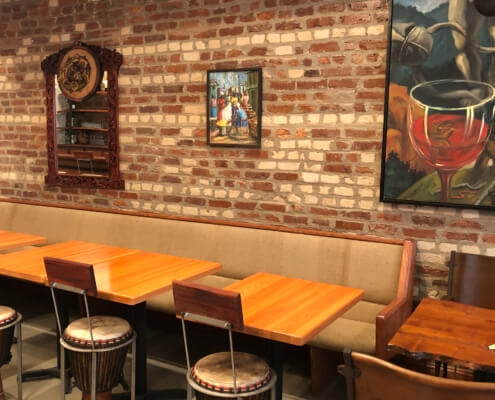 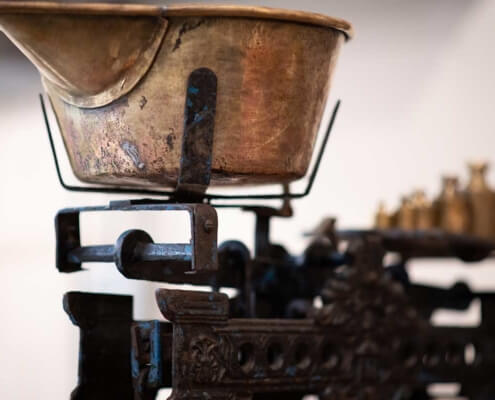 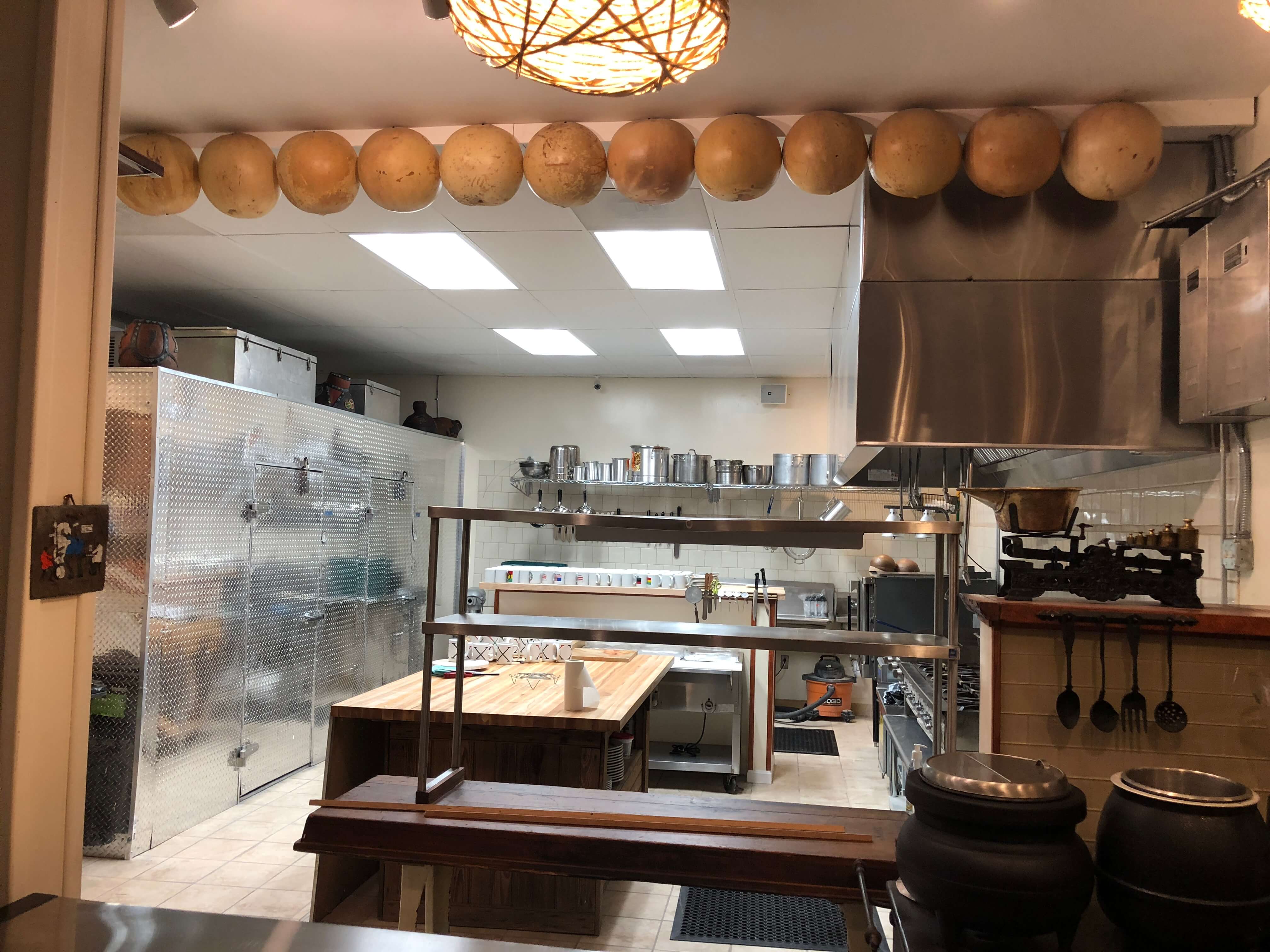 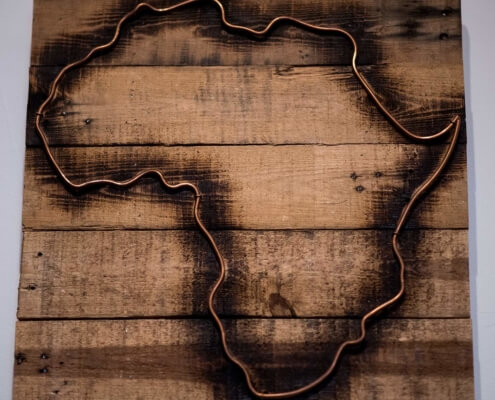 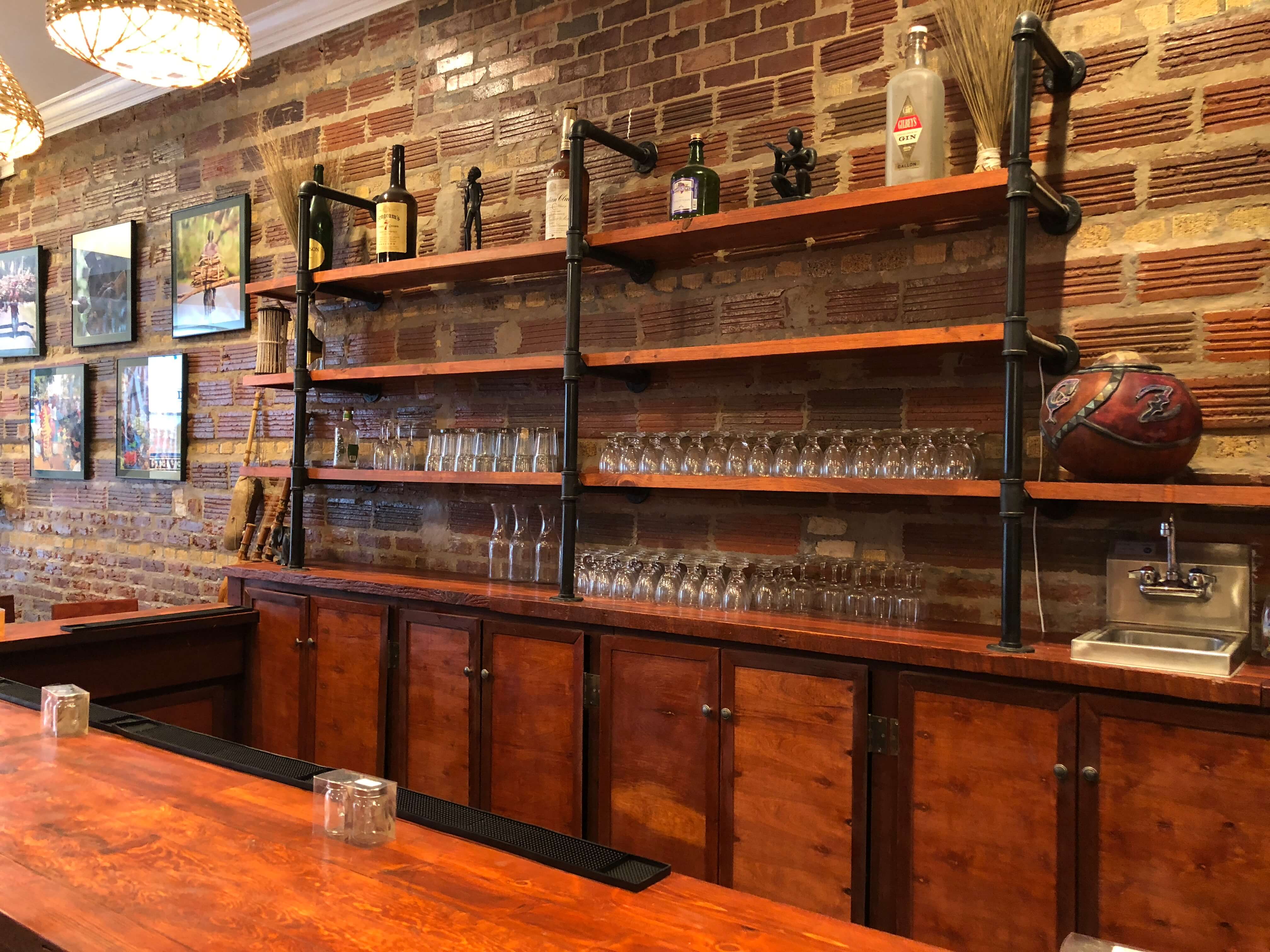 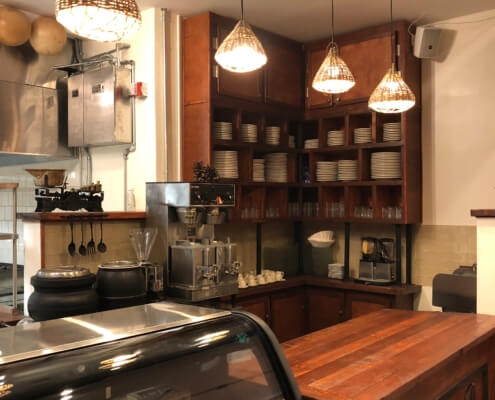 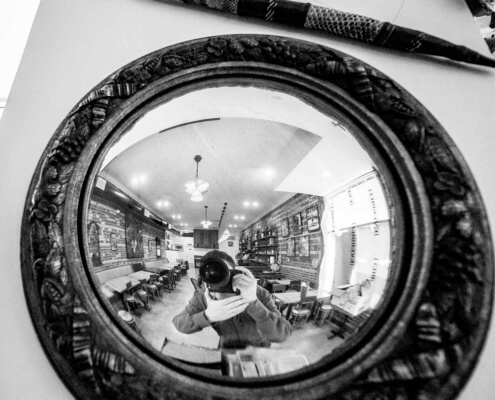 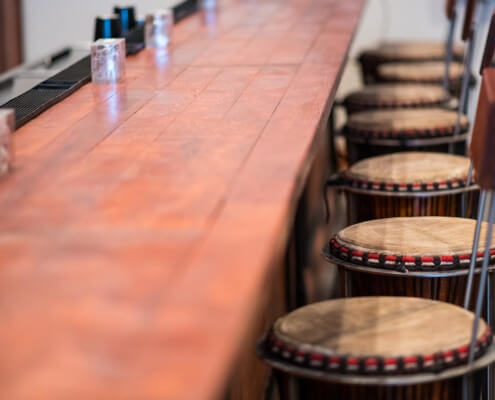 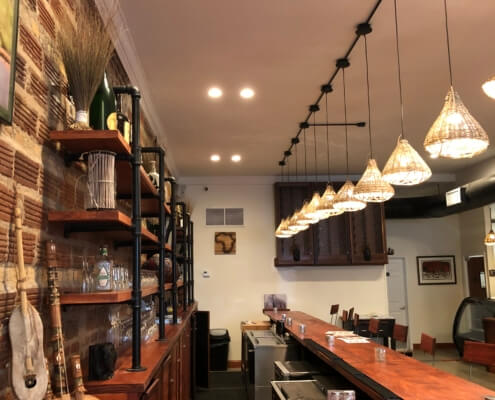 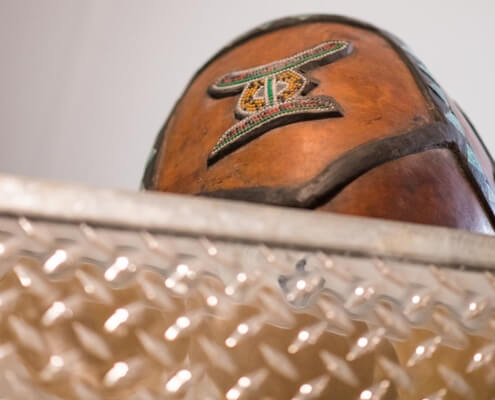 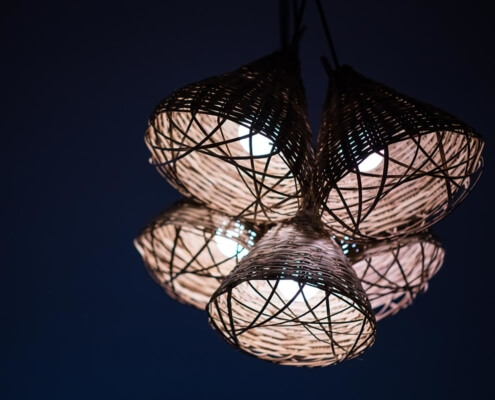 All soups are served with a roll or fufu.

From the Grill | Afra

Although popular throughout Africa, its roots are in the Sene-Gambian & Mali region of West Africa by the “Jollof’’ people. While there are plenty of differences in the way benachin is prepared throughout West Africa, each dish shares a common base of rice, tomatoes, tomato paste, chilli peppers, onions, salt, and spices. 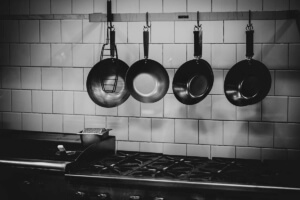 Our lunch menu offers most of the same dishes that are served for dinner. Portions and prices are slightly reduced. We encourage you to visit! 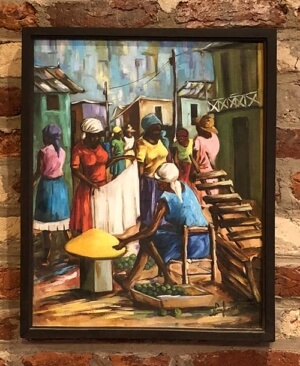 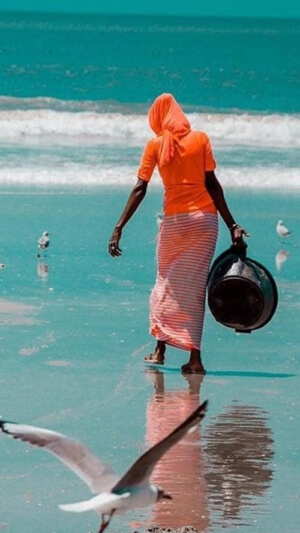 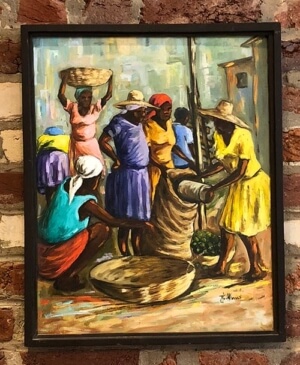 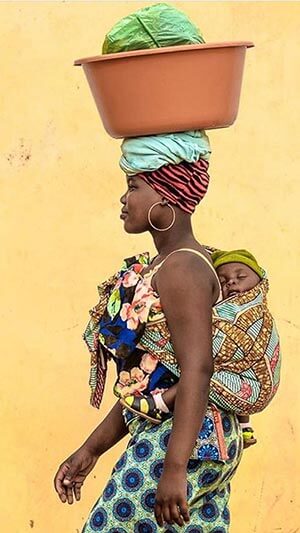 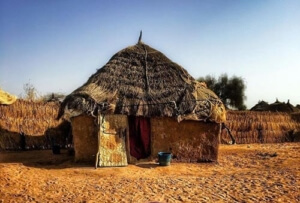 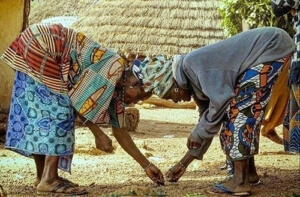 Maps were disabled by the visitor on this site. Click to open the map in a new window.

SPECIAL EVENTS / CATERING:
Host your next corporate event, birthday, graduation party or other gathering with us.

The African kitchen isn’t as foreign as you might think – many of the ingredients we use in our cooking are used throughout the world. There are a number of ingredients, however, that are either unique to Africa or used differently.

The African Baobab fruit is one of the most nutrient-dense whole-foods on the planet. It is a raw superfruit that dries naturally on the branch. Baobab fruit has a tart, somewhat sour flavor. There is also a strong tropical flavor, almost like a sour mango.

The wide leaves of the banana tree are used in West Africa to wrap foods for steaming.

Beans are a common source of protein throughout Africa, particularly in countries like Ethiopia.

Originally from South America, cassava was brought to Africa by Spanish and Portuguese traders and immediately became a staple food. The best known use of cassava is in West Africa, where it is boiled and pounded into a maash called fufu. Cassava is also known as manioc or yuca.

West African food can be very spicy. Chilies originated in Mexico and were brought to Africa by Spanish and Portuguese traders in the 1500s. The variety of chilies found today is astonishing.

Condensed milk is milk mixed with sugar and heated until much of the water has evaporated, leaving a sweet, sticky liquid. In African cooking, condensed milk is often used to add a sweet richness to baked goods and desserts.

Couscous is a pasta that’s still formed by hand throughout all of North Africa. A form of couscous made of millet flour is found in West Africa.

Goat is a protein that’s eaten extensively throughout the world, but it’s not as common in the U.S. Goat is also good for you – it’s lower in fat than chicken and higher in protein than beef.

Hibiscus, also known as sorrel and bissap, is a plant with stunning ruby red flowers. When used in cooking, the flowers are dried and then steeped in tea or dried and then blended to a fine dust. Its ruby red color is alluring; its flavor, lemony-tart and berry-rich.

Lentils are popular all over the African continent, particularly along the Indian-influenced eastern coast; the Horn region of Ethiopia, Eritrea, and Somalia; and Egypt.

Okra originated in Ethiopia and is used throughout Africa to thicken soups and stews.

Also known as dende, palm oil is a fundamental West African ingredient. This bright red oil has a stronger flavor than the vegetable oils used in the United States, and is often used for cooking fish, poultry, meat, and lends its color to the red rice dishes in West Africa.

The peanut is believed to have originated in South America and then introduced to East and West Africa by Portuguese traders in the sixteenth century. Peanuts are commonly used in stews and soups across Africa and peanut oil is often used for frying.

Plantains are eaten throughout sub-Saharan Africa and in regions around the world where African slaves carried their culinary traditions, including Brazil and the Caribbean. Plantains are related to bananas but unlike their cousin, plantains are eaten when both ripe and green.

Rice is one of the most important staple foods in Africa and is particularly important in West Africa where it’s an integral ingredient in dishes like chep-bu-jen and jollof rice.

Shito is a Ghanaian hot pepper condiment that is made in a variety of ways. Shito can be either coarse and full of body or smooth, and medium – or extra – hot depending on how much chilli is used.

Tamarind is a sour tropical fruit – often used in Indian curries and chutneys – that is also a popular ingredient in Africa. 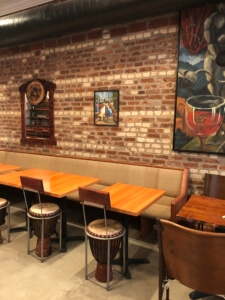 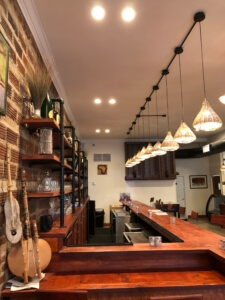 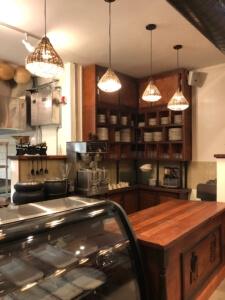 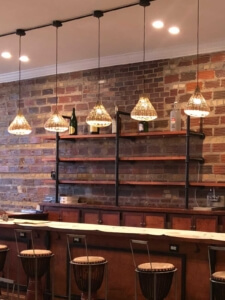